Nymph Memoriter (2013) (Fig #1), is an example of an installation environment containing symbolic metaphors from childhood memory which were triggered by familiar imagery. The hinged works within Nymph Memoriter (2013) (Fig #1) refer to the ambiguity which exists between what is memory and what is dream. That is, how memory can fade over time and be influenced by dreams. The changeable and layered nature of the timber works, which is facilitated through the use of hinges within the installation, references the way memory and dream could be altered when interwoven with subconscious memory, thus creating a new reality. The role of the viewer is also significant to my practice in that the installation works are ‘staged devices’ that instigate possible audience engagement within the specific site. This interaction is significant to my practice because it investigates the juncture between collective and individual space. My intention within this interaction is to provide an installation space in which the viewer can move among the three dimensional and video works while considering their own bodily response in relation to the works themselves.  Within this, I am the protagonist who facilitates a shared space where my conceptual meaning is ‘read’ by the viewer, while at the same time the space enables individual experience in which the viewer’s bodily responses are personal. 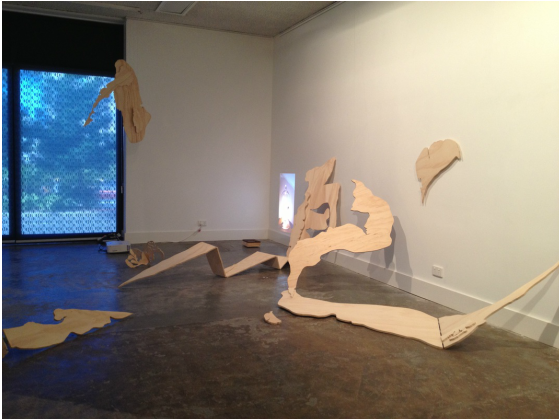